On Medium, “Am I The Mask” By Hassan Khan, in response to Tilt West’s roundtable on Masks & Facade

No one, for any considerable period, can wear one face to himself and another to the multitude, without finally getting bewildered as to which may be the true.

The word “person” derives from the Latin word persona, a term which originally referred to a theatrical mask. Since the advent of modern civilization, humans have increasingly been asked to collaborate with strangers, across borders and beliefs, reaching beyond the small tribes from which we originate. In order to accomplish this feat with some semblance of stability, society requires that we each don a behavioral or social “mask,” especially when we interact with others in the public sphere. Whether at work, at the gym, or in the throes of battle, we learn that particular environments require specific rituals, decorum, and forms of facade.

This last year has forced us to rethink the ways that we “present” ourselves. To some extent, the events of 2020 have encouraged more vulnerability and openness, allowing people to drop their social masks–at least partially–in environments where it would have been difficult or impossible to do so in the past, such as people showing their messy home environments, incorporating their rambunctious children, or opening up about the difficulty of isolation. When the world returns to “normal,” what will that mean for the social masks we wore before the global pandemic?

Of course, most of us have been wearing literal masks for the last year. How have these coverings influenced the ways in which we interact with one another? How do we continue to strengthen bonds and establish empathy when we can only see half of a visage?

On the other side of the coin, history shows us that the wearing of physical masks in the context of fêtes and festivals has traditionally offered wearers a sense of freedom through anonymity. To quote the great Oscar Wilde, “Man is least himself when he talks in his own person. Give him a mask, and he will tell you the truth.” In numerous cultural traditions from Halloween to classical European masked balls, to Greek and Noh theater, masks have allowed people to express aspects of their personalities that they might otherwise keep hidden. Masks offer a form of liberation through obfuscation–a shield which permits each of us to reveal our unbridled being.

This roundtable asks: What is the place of masks–literal and metaphorical–in society today? How do they reinforce behaviors and expectations that may be at odds with vulnerability and individuality? How do they challenge these expectations? How much of our true, unbridled selves should we be able to bring into our public lives? Is the truth ever too much? We hope you will bring your own stories and masks, literal and imagined, to this group conversation, as we deconstruct our own human facade.

Possessed by Masks: The Psychology Behind Disinhibition and Online Harassment (also some links to great research in this essay)

The Spirit of Noh: https://www.youtube.com/watch?v=108d4KnZPxo

We Wear the Mask by Lawrence Dunbar

“What Kind of Human” 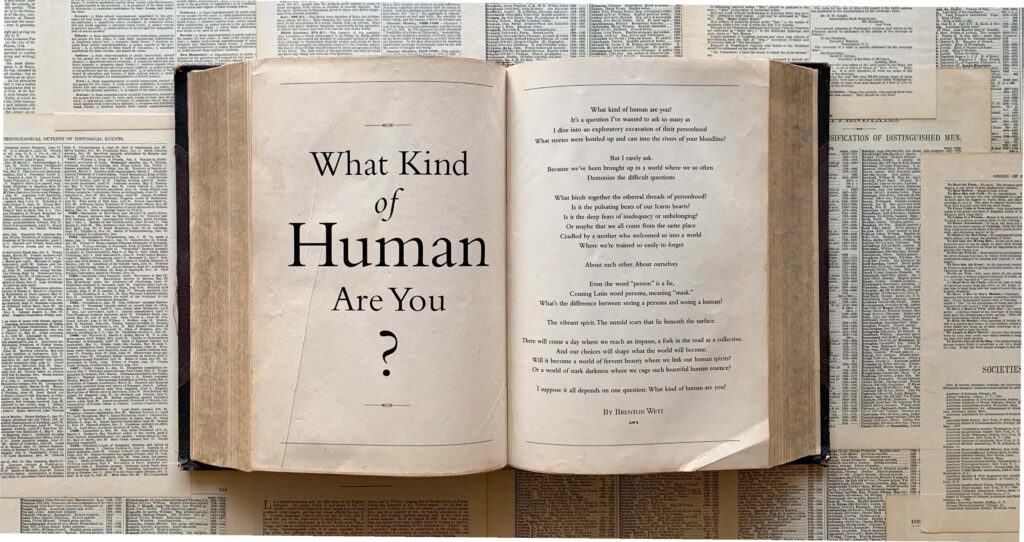 Brenton Weyi uses the power of words to cultivate humanity. He is a writer, thinker, creative polymath, and the son of Congolese immigrants. Informed by travel to nearly seventy nations, his work blends narrative, philosophy, and history to examine questions of ethics and the human social fabric. At Whitman College, he co-founded an award-winning poetry collective and founded an award-winning dance troupe. Currently, Brenton is an inaugural playwright fellow at the Denver Center for the Performing Arts, and his poem “Multiplicity” is one of the official poems of the City of Denver. His work has appeared in Boulevard Magazine, American Theatre Magazine, INC, Daily Stoic, and Head Room Sessions on RMPBS, among others. He was an inaugural fellow in the Lighthouse Writers’ Workshop Writing-in-Color retreat, and he is a finalist at SPACE on Ryder Farm. Brenton is the former campaign architect of a groundbreaking Congolese presidential campaign that appeared in the BBC, LA Times, and more. He also spent time living at a meditation and martial arts school in Asia before working with disenfranchised populations in the region. He collaborated with Union Hall on their nationally curated exhibits of writers and visual artists, Poems for Our Country and Words for Our Country, he has worked with the NFL, Airbnb, and others, and he serves on the board of Tilt West. Brenton is a Moth story slam champion, a proud member of Playback Theatre West & Storytellers Acapella, and a TEDx speaker and lead organizer. He believes truth can be found at the intersection of disciplines and stories.